I think it’s time I properly introduced this comic!

So for those of you who aren’t familiar with the source material, Blakk’s Legacy is a Slugterra fancomic that’s actually about two of the show’s antagonists! 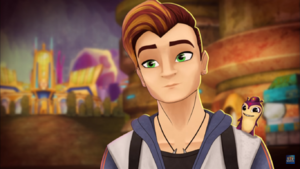 Whaaaat? How could such adorable looking kiddos be antagonists you ask? Well let me start at the beginning...
Slugterra follows the story of Eli Shane after he makes the drop down from the surface (Earth) to an underground world called Slugterra, where slugs are powerful creatures used as ammunition, currency, pets...and they basically keep the magical energy of the world balanced too I guess, it’s weird XD
Eli’s first (and main) antagonist he faces is Dr. Blakk, a cruel and powerful businessman who is responsible for the disappearance of Eli’s father, and the inventor of a terrible process called Ghouling, which is combining slugs and a substance called dark water to make the slugs into evil, more powerful versions of themselves.
Blakk eventually is defeated by Eli and his friends, but nearly a year later, they encounter a boy (who is also from the surface) named Tad, who at first comes across as naive and kind-hearted, but later reveals that he was playing the Shane Gang all along and that he is actually the son of Dr. Blakk, hoping to restore the family business of ghouling. Tad uses his hypnotic slug Pieper to control all the slugs and ghouls, and it’s all pretty devastating, but I find myself asking a lot of questions about this character. When did Blakk have a son, and why was his son on the surface at all? Who was/ is Tad’s mother? Why is Tad trying so hard to prove himself better than his father, when he clearly is not completely heartless and cruel like him?

It’s these questions that led me to make this story, and I hope you enjoy it, whether you’ve seen the show or not :) Thanks for reading!

Even if I didn't see the show, this is an interesting concept! Also, the style is really pleasing to the eye, you pulled that off very well <3

Aw thank you, I’m so glad! The style is a bit different than my main comic, and while I’m still experimenting, I’m aiming for a style that somewhat mimics the show, chunky CGI and all ;)